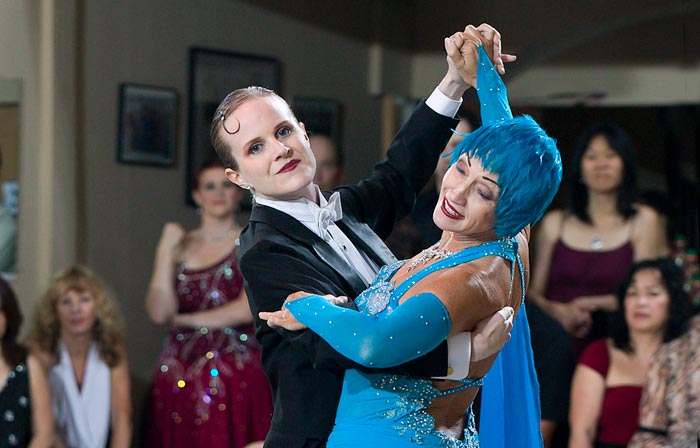 Citabria Phillips says dancing brings joy and connection to her life.  It didn’t start out that way.  She grew up in Texas, watching her parents dance, and couldn’t have been more bored.  Many years later, when she worked up the courage to go by herself to a Friday night women’s Two Steppin’, she fell in love with dance, and it snowballed.  She became infatuated with Lindy Hop, Swing, and other night club dances, and found her way to ballroom. She studied extensively and learned both the leader’s and follower’s parts of all the dances, and also how to be an inspiring teacher.
Along with her former dance partner Zoe Balfour, Citabria ran Dancing with the Queers from 2006 to 2011.  They competed internationally as a couple for eight years, with much success, including several wins as North American Champions in Women’s International Standard, and 5th in the world at the 2010 Gay Games in Cologne.

In 2011, Citabria made a major shift — a switch from leading to following.  Dancing with Angie Esswein, their first time out, they took second place in the National Championships in early 2012, and went on to win the California State Women’s Standard Champion title at April Follies 2012, and second place at the 2012 Eurogames in Budapest. Citabria went on to compete in International Standard at the 2014 Gay Games with Katerina Blinova.